Experiences and sensitivity build up one another in a never-ending cycle. I cannot experience anything if I have no sensitivity, and i cannot develop sensitivity unless I undergo a variety of experiences. Sensitivity is not an abstract aptitude that can be developed by reading books or listening to lectures. It is a practical skill that can ripen and mature only by applying it in practice.

Take tea, for example. I start by drinking very sweet ordinary tea while reading the morning paper. The tea is little more than an excuse for a sugar rush. One day I realize that between the sugar and the newspaper, I hardly taste the tea at all. So I reduce the amount of sugar, put the paper aside, close my eyes and focus on the tea itself. I begin to register its unique aroma and flavor. Soon I find myself experimenting with different teas, black and green, comparing their exquisite tangs and delicate bouquets. Within a few months, I drop the supermarket labels and buy my tea at Harrods. I develop a particular liking for 'Panda Dung tea' from the mountains of Yu'an in Sichuan province, made from the leaves of tea bushes fertilized by the dung of panda bears. That's how, one cup at a time, I hone my tea sensitivity and become a tea connoisseur. If in my early tea drinking days you had served me Panda Dung tea in Ming Dynasty porcelain goblet, I would have not appreciated it any more than builder's tea in a paper cup. You cannot experience something if you don't have the necessary sensitivity and you cannot develop your sensitivity except by undergoing a long string of experiences.

What's true of tea is true of all other aesthetic and ethical knowledge. We aren't born with a ready-made conscience. As we pass through life we hurt people and people hurt us, we act compassionately and others show compassion to us. If we pay attention, our moral sensitivity sharpens, and these experiences become a source of valuable ethical knowledge about what is good, what is rightand who I really am. 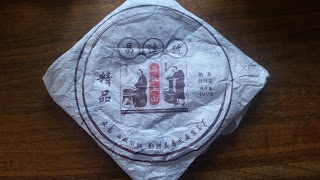 A fairly bland tea. I finished the cake without a problem, but I don't think I would get another. I wish it had a little more something in the flavors profile to make it stand out.

2007 Jingmai Laoshu Gongting Pu-erh sample ($23.90 for a 357 g cake)
This has a bit more interesting going on that the aforementioned cake. I'm not sure if I would get a large amount though.

2010 CNNP 7572 Yellow Mark Pu-erh sample ($17.99 for a 357 g cake)
Oddly enough, this tastes like the yellow mark I remember from several years ago and had quite a lot of (I think it was 2004 give or take a few years). Good stuff for a drinking daily. Probably worth getting some of this. Ordered 3 cakes.

2006 Mengku Old Tree Ripe Pu-erh sample
Hard to describe this one. Not good in comparison to the other samples in this order though.

2007 CNNP Win Ripe Pu-erh sample ($29.98 for a 380 g cake)
This has a good smell reminding me of the first type of pu I bought a decent amount of, but the flavor profile is a bit disappointing.

2010 Banzhang Ripe Pu-erh tea
Has a somewhat cloudy brew with lots of small particles.
Posted by Unknown at 14:58 No comments:

Water quality is something that I have had to deal with now that I live in the midwest USA. The main issue is that most of the water has a very high dissolved solids content, measurements typically yield what is called "total dissolved solids" or TDS. The measurement for my water was about 450 mg/L making it right on the border of brackish water, note that Brita filters and simple solutions like that do nothing to alleviate this problem. Boiling a single kettle of water would result in some lime deposits starting to form. Worse than that, the high mineral content definitely altered the tea making getting decent tea entirely pointless. Fortunately, where I am they treat the water with chlorine gas so that is easy to get rid of by letting that blow off. I now have a fairly solid solution that gets the water to something quite decent for tea. The procedure to get water to an acceptable level will vary depending on where your water supply comes from, how it is treated, and how it gets to where you use it. My solution was to first have a water softener to remove the hard ions, magnesium and calcium. Then the water is run through a 3 stage reverse osmosis setup, with the 1st and 3rd being carbon filters and the 2nd being the active part with the reverse osmosis (RO) membrane. Unfortunately, this is not an inexpensive solution and an alternative is to buy water from the store, but if it is a local brand likely they are just bottling the same garbage water that you get. That makes it critical that the water have gone through a reverse osmosis treatment (my preference) or is distilled to keep the high concentration of ions out. Reverse osmosis was able to take my 450 mg/L TDS down to somewhere in the tens of mg/L. For the tea vendors and aficionados out there I highly recommend using/getting reverse osmosis water for treating most areas water supply as a minimum. Without this you can be missing out on the quality teas you are getting because the high mineral content really overshadows any flavors the tea has making it not noticeably different from standard low quality teas. There can still be other contaminants to be dealt with depending on where you live (nitrates and volatile organics come to mind), but RO treatment goes a long way. The one place I have been where the water was really nice was Eugene, OR, conveniently the home to J-Tea.
Posted by Unknown at 11:18 No comments: